The last few weeks has seen increased speculation that Amazon will be joining the battle for the living room and this afternoon our suspicions were confirmed when Amazon announced that the Amazon Fire TV streaming box is officially a reality.

Quite simply described as a tiny box that plugs into your HDTV for easy and instant access to Netflix, Prime Instant Video and also offers the chance to play games which can be played with a separately sold controller, which looks remarkably similar to something Microsoft might produce.

Interestingly Peter Larsen came straight out swinging haymakers, by describing games consoles as too expensive and Apple TV’s mirroring efforts as laughable and even continued with an uppercut to their competition by criticising the lag on Apple TV, Microsoft’s Xbox Live and the Roku box.

A quick look under the hood reveals that Fire TV sports a quad-core processor with a dedicated GPU, 2GB of RAM (2X to 4X more than competing devices) and state-of-the-art MIMO Wi-Fi for “screaming” wireless performance.

In Layman’s terms despite being much thinner it offers three times the performance of Apple TV with the additional gimmick of being able to search for content with your voice, which should make their competitors stand up and take notice.

“With Fire TV we thought of games right from the beginning – fun immersive games at affordable prices.” Amazon proudly announces. 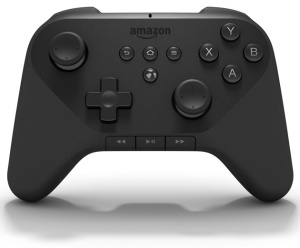 In a rapidly saturated market the big questions are probably going to be, can Amazon survive in the modern battleground arena known as the living room? Or will this box end up gathering dust under the TV? Cheap and cheerful mobile games and a video catalogue that lacks the class of Netflix could feel a little too cheap for TV snobs, but I cannot help but see parallels with how Nintendo Wii seized an opportunity with the lower end of the market in 2006.

I don’t think this is a battle for the living room, most houses have bedrooms filled with kids that cannot afford the Xbox One console prices and inflated games at £54.99, so a cheap option that offers games, TV and films will bring peace and quiet to some households at a price that won’t break the bank. This reason alone could see Amazon succeed in a heavily saturated market and could see them take a bite out of Sony and Microsoft’s profits, much like Nintendo did a few years ago.

However, once again we see a service only launched in the USA with future release dates for other countries available, you can’t help but feel that companies need to recognise that there are other countries outside of America and that in a world of online currency converters we all know that $99 should not translate to £99 in the UK.

The next 2 months should prove quite interesting as heavy weights Amazon, Google, Apple and co battle it out to the end, but I cannot help but think there is room for everybody and Amazon are focussing on a slightly different market.

What really stands out though is people are finally cutting the cord, we now stream music on Spotify, carry a library of books on a tablet and all these factors make an overpriced cable or satellite package with 500 channels of rubbish you don’t watch feel far from relevant to your typical modern digital native, so if anyone should be worried it’s the conventional TV providers who are still clinging to business models of the past.