Daily Mail readers might be fooled into thinking that England is going through a terrible drought at the moment where arid landscapes are common place but don’t go looking for the tumbleweed just yet because this week I have seen nothing but rain whilst on my travels.

As I consider myself an old school male, I would never let a little rain stop me from running or in fact anything at all. I must confess to getting frustrated with people who moan and complain about the weather and say things like “You can’t do anything in this weather”. You can do anything you want and as a man much wiser than me once said “There’s no such thing as bad weather, only unsuitable clothing”.

Despite the weather, I have managed to notch up a respectable 15 miles running this week, in fact the only negative aspect to report is that I only have one week left of the Get Running App that has proved that you really can go from being a couch potato to 5K if you want to.

I am somewhat surprised but pleased to announce that I am now managing a 5k run in around 31 minutes, so although it’s not under thirty minutes which is my ideal target, it is still a hell of a lot better than the guy that struggled to run for a couple of minutes a few weeks ago.

As for running in the rain, am I on my own in thinking that it actually feels pretty good?

Follow the light at the end of the tunnel...

Now for the historical bit of my story, the approaches to the tunnel were cut by 1829 and the underground construction carried out during 1835. In 1837 the 360 yards long (329 metres) tunnel, with a tow-path each side, opened. Now both the north portal, in Ivyhouse Lane, and the south portal, in School Street, are Grade ll listed and industrial traffic has given way to leisure transport on the Birmingham Canal Wolverhampton Level. 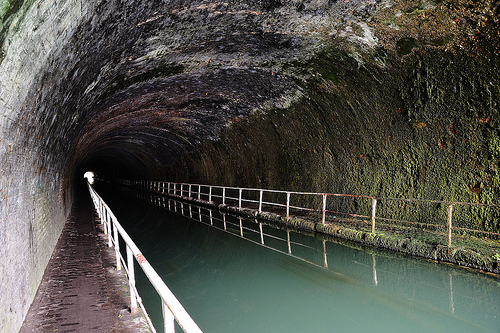 Once inside its much darker than this photo suggests.

Like at the end of any Mork and Mindy episode, I have learned a few lessons this week, such as don’t let bad weather stop you from doing anything that you want to do and always head for the light at the end of a tunnel. However the most important lesson is to forget about times and distances and enjoy your surroundings because its the overall experience that makes you feel alive.

Once I finally achieve 5k in under 30 minutes and enter a 10k run then maybe, just maybe I will call myself a runner but until then, I will keep hitting the streets and earn my stripes on the treadmill of life.