Since returning from our fantastic honeymoon in Italy, things have been a little crazy over the last month.  After only a few days of being back at my desk in Birmingham, I set my e-mail out of office to “I am out of the office until September 17th” and put my lunch in a tea towel (carrying it on a little stick like Dick Whittington) and set off to the big smoke A.K.A. London town where I will be spending most of the summer providing IT Support for the RHS Hampton Court Flower Show and the 2012 Olympic Games.

12 hour days at the RHS show combined with being away from home meant that I could only squeeze one 3 mile run a week into my busy schedule, which was a little frustrating but on a positive note my leg now feels perfectly fine.

When visiting family in Derby, I decided to run from the train station to their house which worked out quite well as it was exactly 3 miles. Whilst running, I was thinking about missing our annual pilgrimage to the Glastonbury Festival and as if by magic a signpost for “Glastonbury Road” appeared. 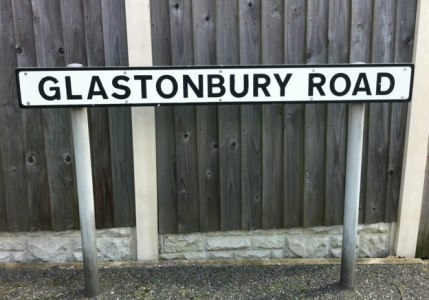 A reminder of how much I miss Glastonbury this year during my last run.

I had to document the moment by taking a quick photo and chuckled to myself before arriving back at my parents house looking like an out of breath sweaty mess and hit their shower when I walked through the door like I did 20 years ago.

As soon as the RHS Flower Show had finished, it was time to head straight to the Olympic Park which means with travel, I am out for 15 hours a day meaning my running regime has been put on hold but I am still managing at least one run a week which is fine but I have one eye on the Birmingham half marathon in October and if I really want to think about entering then I need to think about increasing my mileage.

However the positive aspect of being away from my 9-5 desk job for the whole summer means that I have been walking 8-10 miles a day, so although the running as taken a backseat at least the miles are still being covered.

Being away from my usual routine until September will make this quite difficult but I’m not giving up just yet and can be quite stubborn sometimes so watch this space.