Thunderclap is an interesting tool that taps into the current buzzwords of engagement, influence and reach by allowing people to pledge Tweets to a cause or event and once enough tweets have been accumulated, they are unleashed simultaneously for maximum impact and allows a message to be heard by everyone saying it together.

You don’t need big numbers to make an impact with the all important “Reach factor” potentially meaning that a user with 200 Facebook friends could amplify a message better than someone with 3,000 friends. It all depends on your cause or events voice and shareability—and how much your friends are engaged.

Essentially think of Thunderclap as one message, one number, one date making It a tangible way to measure awareness and there is no reason to worry about spamming, because you only ever allow Thunderclap to share a message on your behalf if the project reaches its goal.

In November the British Legion became the first UK organisation to use a social media tool to encourage people to mark the two-minute silence, by using Thunderclap to allow Twitter and Facebook users to simultaneously send the same message.

The message: “I’ll be remembering the fallen at 11 o’clock #2MinuteSilence #LestWeForget,” was sent at 09:00 on Remembrance Sunday, the charity and the campaign was a huge success with a social reach of over 10 million people. 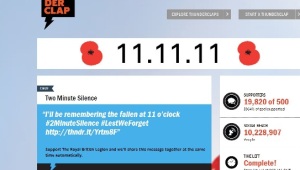 Proof the Thunder Clap can work in the UK

The BBC are now getting involved and are asking for people to show support for their flagship technology programme Click fronted by Kate Russell’s and advise “Click’s first BBC2 airing on 14/01? We’re running a Thunder Clap.it to spread the word!”

As more and more companies look at how they improve online engagement and the amplification of a humble tweet, this could be the year that we begin to hear much more about “Thunder Clap” but only time will tell if it can work as a business marketing tool, and eventually prove invaluable or will disappear into the night that Flash Mobs that were all the rage a few years ago.