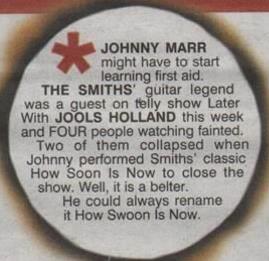 Johnny played some songs from his new album but also sang…yes I said sang ‘How Soon Is Now’ and ‘Big Mouth Strikes Again’ which proved a little overwhelming for some fans in the crowd.

Great to the legendary Marr playing Smiths songs again but must admit it felt a little strange hearing him singing and not Morrissey.

A great performance which left me wondering “What If the Smiths got back together?” but equally there is a side to me that hopes that they won’t and my memories of them don’t get spoilt.

All in all though, the only questionable decision to come out of the show was Johnny Marr’s choice of hair dye but apart from that it was great to see the classics being played once again by the guitar maestro himself.

Johnny Marr – How Soon Is Now